One of the most common mistakes astrologers and students make is they fail to understand the implications of long-term transits, over time. This is especially true with the planet Saturn, who takes 2 1/2 years to get through one of the signs. Not only does Saturn take 2 1/2 years to get through a sign, but he goes through numerous direct and retrograde cycles in the process.

Saturn spends close to half of his time in retrograde motion, about five months out of the year. This shows his work be one of both external and internal focus. We’re supposed to be reflecting on our long-term commitments almost as much as we are supposed to be acting on them.

In January 2017 Saturn entered Sagittarius. At the time I said that the next 2 1/2 years (actually about three years if you consider Saturn went retrograde back into Scorpio) were going to revolve around making a commitment to what inspires us rather than what we fear. I said this because the previous 2 1/2 years Saturn had gone through Scorpio, the sign of transforming our emotional fears and vulnerabilities into emotional strengths and self-control.

The last two years we have seen this play out, pretty clearly in my opinion. We have seen since January 2017 a new US president and the stark choice that has presented for everyone in the United States, both culturally and politically. A deeper philosophical polarization has emerged the likes of which we haven’t seen in our lifetimes, and that includes during the 60s. But this ideological shift is not just restricted to the United States. We have seen greater appeals to nationalism, protectionism and many many forms of “Otherism” (Mexicans, Muslims, Russians, white people, black people, men versus women, Democrats versus Republicans) globally.

This polarization around what gives us hope, and the world we want to create as a result, is pure Sagittarius energy. After two years of this transit we are seeing things come to a head and the philosophical battle lines being drawn for 2019. We need look no further than the implications of the recent US midterm elections to recognize this fact. The Democratically controlled Congress is going to be the most liberal perhaps we have ever seen. It will exercise enormous oversight over a president who has already been implicated in federal crimes and would have been indicted had he not been protected by the mantle of the office he occupies. Ironically, it seems very clear that he obtained that office, and the shield that protects him, illegally. This is not my opinion. His partner in crime has been indicted for those illegal campaign activities and he clearly directed them. Does anyone actually think Michael Cohen paid off these women, buying their silence, on his own? Does anyone actually think it was NOT a clear attempt to obstruct the truth from the American voting public? Does anyone actually think disclosures like this, weeks before the votes were cast in November 2016, would not have subtracted 80,000 votes in three states? The answer is of course “yes”, there are plenty of people who believe none of that matters, at least they say that.

Saturn / Ketu Dance
The year 2019 is going to show some unprecedented transits, like I have not seen before. Especially the six-month dance of Saturn and Ketu, within 2° of each other in Sagittarius. This will bring a relentless focus on the issues that I’m describing. The consequences for what we believe and what gives us hope will be revealed. Those who are hanging onto a worn-out paradigm and power structure that does not reflect the current state of the world are in for a big surprise. Stated more directly, the changing demographic and financial realities of the world are here to stay. We are moving away from the time when “white male privilege” and “entrenched oligarchies” control everything. 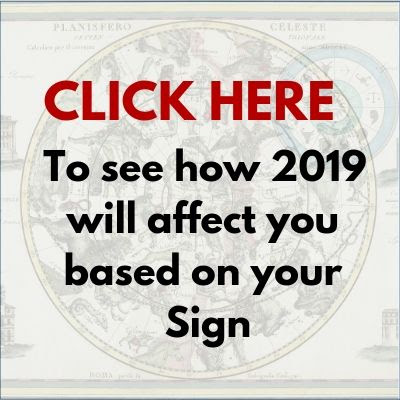 The next generation, those raised on social media and shaped by the democratization of information, are creating a new world that is toppling the post-World War II global power and financial structure they are inheriting and I have hope in them. This post World war 2 rapacious experiment has proven unsustainable, with the scars and wounds being born by the underprivileged, mostly brown skinned people and the very earth itself. The mindless consumption of natural resources, the tragic exploitation of animals for food and profit are the most egregious examples of this disconnect from spirit and each other, in my opinion at least.

2019 is going to reveal the consequences of these actions and the world we have created, with major financial corrections, upheavals with many polarizations and divisions culturally and globally and perhaps even a serious war and/or paradigm shifting, catastrophic terrorist event.

These events will compel and challenge us all to commit to the world we want to build with each other and to look much deeper than this world as well. In the highest sense, Sagittarius is about our spiritual purpose and direction and those things not of this world.